AUTHOR’S NOTE: It now appears that Heineken did not apply for the “Czech Beer” designation for its own brew, but rather on the part of Krušovice. This post has been corrected.

Today’s Prague Daily Monitor has a translation of a story from the Czech newspaper Hospodářské Noviny on the first beers to use the České Pivo (“Czech Beer”) label. Officially approved by the EU last autumn, the label is a mark of Protected Geographical Indication that indicates minimal levels of local products, traditional methods of production, and the beer’s place of origin.

And the first brand listed in the story is Heineken.

END_OF_DOCUMENT_TOKEN_TO_BE_REPLACED

Otherwise known as Březňák, Pivovar Velké Březno has one of the strangest and most tragic histories in the Czech lands. Located in the Czech-German border region that was once called the Sudetenland, for most of its early existence the brewery had a pronouncedly German clientele. Now, returning to its roots, the brewery has launched an excellent new beer for the German market: the so-called Doppel-Doppel Bock.

Of course, it’s never quite that simple when the Nazi invasion of Czechoslovakia and the Holocaust are concerned, and Březňák is so weirdly mixed up in the situation that as you hear the story it’s hard to remember which level of irony you’ve reached. For example, this brewery proudly supplied beer to Rommel’s Afrikakorps throughout the war. But the man who posed for the picture on the label, Victor Cibich, aka Zippich — the very image of a once-Nazi brewery — was actually a German-speaking Czech Jew. And yes, it gets even weirder from there.

END_OF_DOCUMENT_TOKEN_TO_BE_REPLACED

Since the EU entry of Poland and the Czech Republic in 2004, many Czech brewers have been expanding their exports to the north, and just about every year a sizeable contingent from the Polish Bractwo Piwne comes south to check out the winners at the Czechs’ SPP beer awards. However, both cases are about Poles enjoying Czech beers, and the interest does not appear to cross the border in both directions: the Czech Republic does not import many beers of any kind, and certainly very few come from the land of Lech.

However, a few Polish brews have showed up recently at Pivovarský klub, so I picked up bottles of Perła and Ciechan Miedowe Niefiltrowane for a tasting.

END_OF_DOCUMENT_TOKEN_TO_BE_REPLACED

A few months ago, a friend mentioned that when he was just starting out as a young lawyer in the mid-1990s, he did some work at a law firm here in Prague. One of his projects back then was the contract for a possible sale of Budějovický Budvar to Anheuser-Busch.

That sale never went through, of course, and Budvar and Anheuser-Busch maintain a “frenemy” relationship today, entering into distribution deals for Budvar (only under its “Czechvar” pseudonym) in the United States while continuing international legal battles over the name “Budweiser.”

But talk of Budvar’s sale (subscription required) has returned, as the Prague Daily Monitor news desk reports, via Hospodářské noviny.

END_OF_DOCUMENT_TOKEN_TO_BE_REPLACED 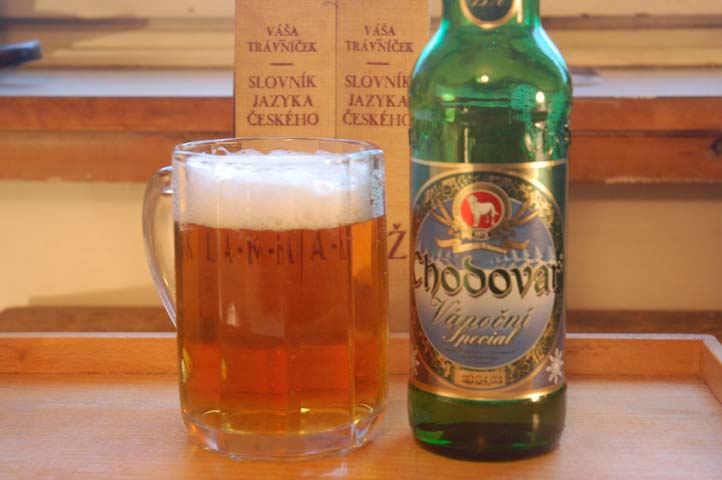