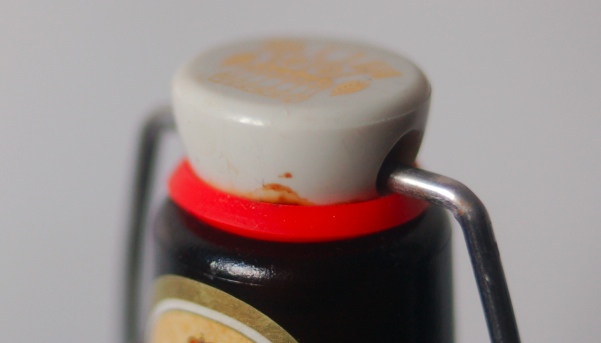 That picture shows how I knew it was working: a bit of brown liquid had blown through the rubber gasket on the swing-top. At the height of activity, the bottle was hissing like an asthmatic cat, releasing built-up carbon dioxide as the yeast did its work. It meant that my first experiment in beer hacking was successful, at least as a proof-of-concept. What remained to be seen was how it would taste.

What I started with was originally straight Pardubický Porter, a Baltic Porter from the Pernštejn brewery here in the Czech Republic. I liked the beer plenty, but sometimes I thought it was too sweet. And I wondered if I could change it using a minimal amount of effort. In particular, I wondered what it would taste like if it was inoculated with brettanomyces. So I filled a couple of swing-top bottles with draft Pardubický Porter and dosed them with the dregs from a bottle of Orval, which I knew should contain some brettanomyces.

I called it “beer hacking,” meaning “modifying a commercial beer to suit your own tastes.” The idea got some attention. Jeff Bell commented that he didn’t think it would end well. William Brand wrote in to note that Orval actually has two yeasts in each bottle, so I’d be getting regular ale yeast as well as brett. And some dudes on Reditt started debating if it would work or not.

My original thought was that the yeast in the Orval bottle might be dead, so all I would end up with would be the effects of autolysis. But when I found the bottle spitting and wheezing in the beer room, I knew there was enough life for the beer to undergo a secondary fermentation. I let it sit upright at winter room temperature for five months, and then opened it at the end of a recent kitchen table tasting.

Once the gushing stopped, we poured four good glasses. Instead of coffee and cocoa sweetness, the nose had loads of horse-blanket and barnyard aromas. There was a tack-like leatheriness in the mouth, with a lovely tannic structure. It was sour — not lambic sour, but sour-sweet like a Flemish red. And the mouthfeel was quite different for me: the hacked beer gave the impression of being more substantial, vinous and heavy in the mouth.

If you put it in stemware and gave it to an unknowing guest, he’d probably ask what kind of wine it was.

I’ve still got one bottle left, which I’ll try again in a few months. And another project with a different beer — a simple hack of a standard Czech pale lager — is currently underway in the refrigerator right now, which I’ll report on in a few weeks. I still plan to age Pardubický Porter in an oak barrel someday, or at least put it on oak chips. The possibilities for beer hacking are endless.

Of course hacking a beer is not the same as brewing one. But at least it’s slightly more involved than the basic, open-bottle-pour-in-face type of beer consumption. Not every experiment in beer hacking is going to land butter-side-up: my attempt to make an Eisbock last month resulted in two very flat, very unfrozen, very ruined half-liters of Czech strong lager. But it is all in the name of science.

Our thoughts are with Bill Brand. We’re raising a glass of hacked beer to him tonight.