A Visualization of Beer Consumption By Country Each year, the Czech Republic consumes the most beer per capita, regularly hitting around 160 liters for every Czech man, woman and child. But how does that compare to other countries?

The visualization above is part of a 12-nation comparison from Snippets.com, and re-posted here with kind permission. Each glass depicts the relative annual beer consumption per person for the specified countries, using data from a 2004 report by the Japanese brewer Kirin, whose retro recipes we noted earlier.

Here’s how the 12 nations stack up: 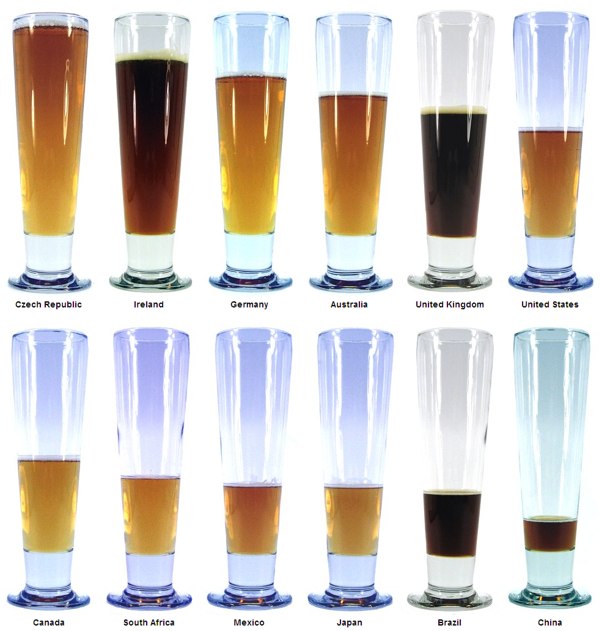 Poor Brazil. Poor China! Even people in the United States drink only about half as many beers as what the Czechs consume — and much of that, of course, is Bud Light.

NB: this is not a list of the first 12 places, but rather a comparison among various countries. According to Wikipedia’s list of beer consuming countries in 2004, Austria (not depicted here) would come before the UK, while Belgium, Denmark, Finland, Luxembourg, Slovakia and Spain would all rank ahead of the United States. And you can forget about 12th place: China’s meager beer consumption of 22 liters per person would not even place it among the top 35 countries.

It’s worth checking out the visualization’s large-format original.