Back in March I wrote about pre-lager brewing in Bohemia, citing an article-slash-lament on the subject from the December 3, 1876, New York Times. That story detailed the “complete revolution” in brewing then taking place in late nineteenth-century Bohemia, the western half of today’s Czech Republic, moving away from the traditional “high fermentation” breweries (making ales) to the newer style of “low fermentation” brewing which produced lagers.

Today, 99.9% of Czech beer production is lager. But what were the beers here like before the big switch to industrial lager production?

Well, at least some of them were also lagers. 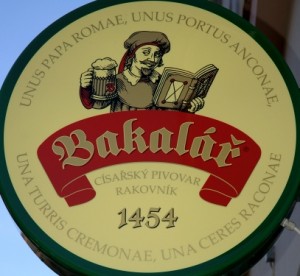 An article by Marie Černohorská in the Czech brewing journal Kvasný průmysl (issue 5, 2004) notes that even before the arrival of factory lager production in the late nineteenth century, bottom-fermented beers had long played a role in Bohemian brewing, albeit a small one.

In the fifteenth century, the town of Žatec (Saaz) brewed a famous bottom-fermented beer called samec. Beer from Žatec is mentioned as being of extremely high quality in “De Cerveceria,” a sixteenth-century Latin text on brewing by Tadeáš Hájek z Hájku, court physician to Holy Roman Emperor Rudolf II.

Another old, bottom-fermented beer style was popeněžní (akin to “post-money”) pivo, which, according to a story at the Rakovník brewery website, was said to be brewed from barley left on the threshing floor. In Rakovník, it was also known as freiberk, and the Rakovník brewery page calls it a “weak and cheap” drink. One imagines that it must have been a high-quality version of popeněžní that was delivered from the brewery in Jihlava to Holy Roman Emperor Frederick III of Habsburg in 1452.

Another reference to the old bottom-fermenting beers in Bohemia, according to Ms. Černohorská, is to be found in “Die Kunst des Bierbrauens” (1794) from František Ondřej Poupě (1753-1805), a celebrated Czech brewer, inventor, author and brewing industry reformer. Sometimes known by the German name Franz Andreas Paupie, Poupě wrote in 1794 that a brewer must be aware

“that beer can be fermented by two techniques — either by top fermentation or by bottom fermentation,”

and noted the places where beer was produced by bottom fermentation:

“The question is: where are beers produced with bottom fermentation? Answer: the whole of Bavaria and the English lands, and some places in Bohemia — for example, in Jirkov, in Petersburk [near Karlovy Vary], in Rakovník, and in earlier times in Žatec, the so-called samec beer, and lager beer, which is produced in the same manner.”

Poupě’s assertion that the English lands were producing bottom-fermented beers in 1794 might raise a few eyebrows, but that is apparently what he wrote. (Martyn Cornell’s Zythophile blog has more on the history of English lager brewing, though his dates don’t go quite so far back.)

For most breweries today, claiming a foundation in 1366 is highly dubious: even if a brewery did exist 600 years ago, it was probably making something very different at the time (very likely an ale, probably brown, probably cloudy and quite possibly sour), while the golden Pilsner-style beers such breweries produce now only date from 1842. But in the case of at least a few Czech brewers — Rakovník and Jihlava in particular — there is a much stronger connection from today’s modern lagers to the bottom-fermenting beers they produced way back when. As soon as someone puts popeněžní in bottles, I’m buying a case.