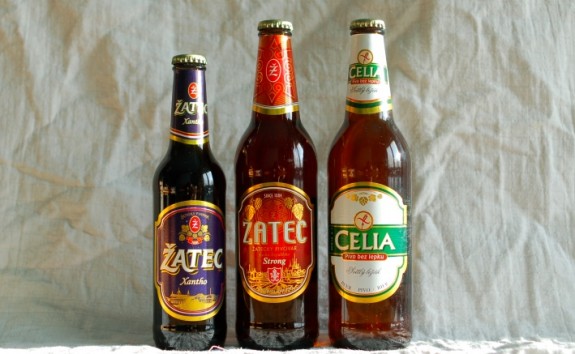 It’s always humbling to be called an expert on anything, and the more I learn about Czech beer the more I come to think my expertise extends only as far as the drinking of it. Nevertheless, I was happy to be asked to write some tasting notes for a Czech Beer Festival that took place at the Porterhouse pubs in London and Dublin this past November.

The surprise? The festival lineup went well beyond the expected also-rans and usual suspects. Among the Czech beers we all know quite well were several rarities, as well as a few I hadn’t yet heard of, including what looked like two new beers from Pivovar Žatec, the historic underdog brewery in the great hop-growing town also known as Saaz.

On the list: Žatec Strong, an 18° beer, as well as what looked like a new 14° dark lager. And when I checked the brewery’s own website, I saw they were even putting out a new, gluten-free beer, called Celia, and a Cornish Steam Lager. Whatever happened to the old underdog that couldn’t seen to think beyond the common půllitr?

Impressed by the lineup, I wrote to the brewery managers and asked if it would be possible to taste the new beers. The Cornish Steam Lager was unavailable, but they were able to provide a couple of samples of their Strong, Celia and the 14° dark.

First surprise: the “new” 14° dark lager was in fact just a new label on the beer we know as Xantho, originally promoted for its high level of xanthohumol, a compound naturally found in hops, and the “magical effects” thereof, and which initially seemed to be marketed towards women. At Ratebeer it is listed as one beer, “Xantho (Dark Lager),” while BeerAdvocate gives separate listings (and different ratings) for Xantho and Dark Lager, though both with the same 5.7 alcohol. It is in fact the very same beer, and a very good one: dark ruby in color with slight molasses and honey notes in the nose, a relatively light mouthfeel for 14°, with nice maple sweetness balanced by lightly gingery, moderately bitter finish. My sample bottle was in great shape, better than I remember from my tastings of the original Xantho.

Žatec Strong surprised: when I heard it was an 18° beer, I immediately thought it would be a Czech “Porter,” meaning a Baltic Porter, meaning nearly black. In fact it’s more of a strong polotmavý, or half-dark: a gorgeous clear amber with a loose tan head of very little duration — pehaps not surprisingly, considering its strength of 7.3%. In the nose, it has rich dough and slight pumkin-pie spice, followed by plummy, povidla-like flavors in the mouth with significant butterscotch and toffee notes, creating a sweet, koláč-like impression followed by a bitter, herbal, almost medicinal finish. After a few sips, I thought the buttery diacetyl flavors were perhaps too strong. Later tastings brought out more pleasant, syrupy notes of sour cherries.

Considering it is made for people suffering from celiac disease, Celia is really pretty okay — much better than you might expect. It pours a clear gold with a fluffy white head, followed by grainy, corn and malt notes in the nose with just a touch of aroma hops. It has a light, malty body with an understated, bitter Saaz hop finish. I’d say it’s about average for a pale Czech lager, which is very good by international standards, and I’d call it excellent for a gluten-free brew from just about anywhere.

Like many beer fans, I’d love to see a beer from Žatec that really showcases the aromas of the town’s noble Saaz hops — despite the name, Žatec beers seem only about average in hop character, and certainly not as wow-packed as the brews coming from upstarts like Pivovar Kout na Šumavě. But one great dark lager, a good strong amber, and a new brew that brings a fair dose of flavor to the gluten-free market? Plus a fugitive take on steam lager, aka California Common?

It’s heartening to see a storied old brewery trying new things, and with such success. Heartening, and humbling, too.