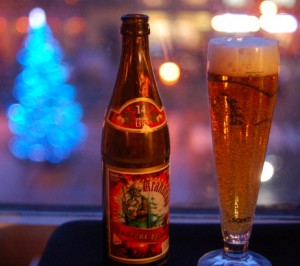 Not all Czech Christmas beers are strong amber monsters like the holy brew sanctified at Klášterní Pivovar Strahov’s Christmas beer mass. Not all are malty, chewy desserts like the 17° Sváteční speciál from Broumov. In fact, the most common style for Czech holiday specials is a 14° golden beer which is just a touch stronger (usually around 6% alcohol) than a standard Czech pale lager.

Perhaps most typical of the style are the Vánoční speciál from Pivovar Krakonoš and the Speciál 14% from Pivovar Poutník in Pelhřimov.

Brewed at 14°, the Krakonoš Vánoční speciál has a very moderate 5.8% alcohol (“moderate” considering this is meant to be a winter warmer). The winter-themed label features the Krakonoš giant, the spirit of the Krkonoše, or Giant Mountains, with the number 14 prominently displayed above the brewery’s foundation year of 1582. The label lists water, barley malt, sugar, hops and hop extract as ingredients.

It pours a clear pale gold with a loose white head that fades quite quickly. It has much more carbonation than many Czech lagers and is more than slightly fizzy. It has a nose of grain with a touch of raw corn and honey. In the mouth, there is a sweet, malty kick-start with some light vanilla notes rounding out into a full, buttery mouthfeel and finishing with more than a hint of butterscotch. 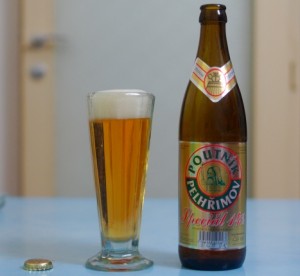 It’s very similar to the Speciál 14% from Pivovar Poutník in Pelhřimov, which also has 5.8% alcohol and which also lists sugar as its third ingredient, though unlike Krakonoš, the Poutník beer specifies the use of Saaz hops on the label. In the glass it is a clear light gold with an inconsequential white foam of no duration, and has a fine, fizzy, champagne-like carbonation. The bouquet is of sugar and vanilla with some fruitiness. It has a thin body with a burst of sweetness, some notes of hard candy and tutti-frutti followed by a slightly medicinal finish.

These two beers are probably not for everyone: hardcore beer fans might criticize them for not being interesting or flavorful enough, while Gambrinus drinkers would fault them for being too filling. Regardless, both are fairly typical holiday brews in these parts.

Or perhaps they were typical holiday offerings: today, more and more Czech brewers seem to be making more flavorful brews for the holidays. Much like the Opat and Strahov versions, Pivovar Bašta in Prague is offering a pair of tmavý (dark) and polotmavý (half-dark) Christmas beers brewed at 15°; other small brewers such as Milan Rambousek have produced wonderful strong dark Christmas beers.

We’ll be tasting a bunch of the best this Thursday, December 18, at the Czech Beer Academy’s Christmas beer tasting (RSVP at tel. +420 233 088 612 or via e-mail at moprg-pr@mohg.com). And even more should show up at this weekend’s Christmas Beer Markets, a can’t-miss event for lovers of real beer.

Beer on TV: How Stuff Works